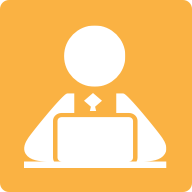 G1 is planned as the long term replacement for the Concurrent Mark-Sweep Collector (CMS). Comparing G1 with CMS, there are differences that make G1 a better solution. One difference is that G1 is a compacting collector. G1 compacts sufficiently to completely avoid the use of fine-grained free lists for allocation, and instead relies（依赖于） on regions. This considerably simplifies parts of the collector, and mostly eliminates（消除） potential（潜在的，有可能的） fragmentation issues. Also, G1 offers more predictable garbage collection pauses than the CMS collector, and allows users to specify desired pause targets.

The G1 collector takes a different approach to allocating the heap. The pictures that follow review the G1 system step by step.

The heap is one memory area split into many fixed sized regions.

Region size is chosen by the JVM at startup. The JVM generally targets around 2000 regions varying in size from 1 to 32Mb.

In reality, these regions are mapped into logical representations of Eden, Survivor, and old generation spaces.

The colors in the picture shows which region is associated with which role. Live objects are evacuated (i.e., copied or moved) from one region to another. Regions are designed to be collected in parallel with or without stopping all other application threads.

As shown regions can be allocated into Eden, survivor, and old generation regions. In addition, there is a fourth type of object known as Humongous regions. These regions are designed to hold objects that are 50% the size of a standard region or larger. They are stored as a set of contiguous regions. Finally the last type of regions would be the unused areas of the heap.

Note: At the time of this writing, collecting humongous objects has not been optimized. Therefore, you should avoid creating objects of this size. 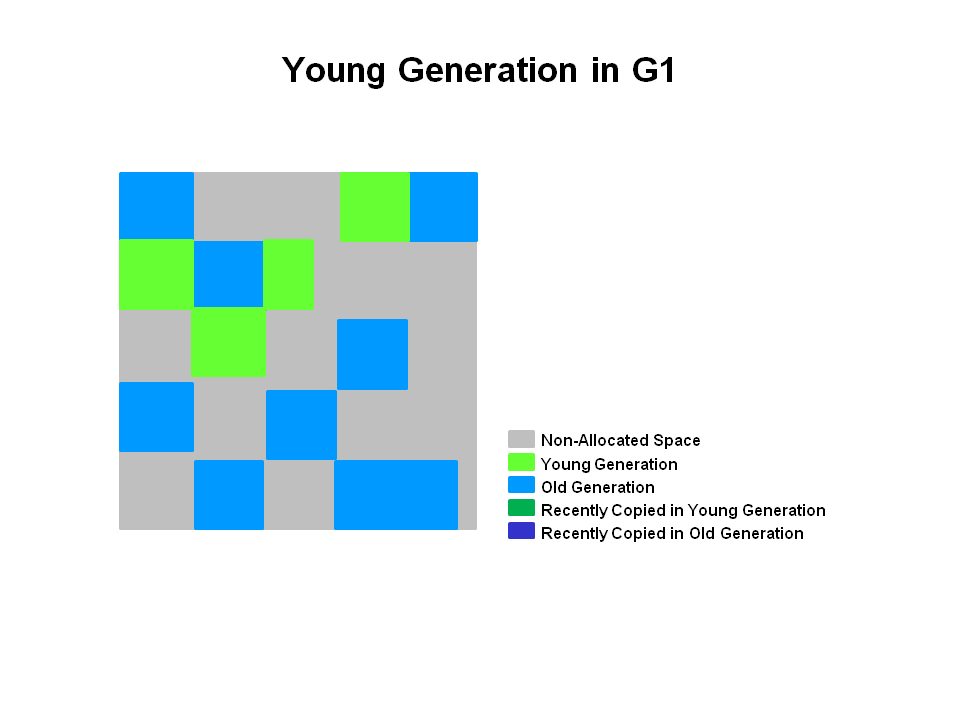 Live objects are evacuated (i.e., copied or moved) to one or more survivor regions. If the aging threshold is met, some of the objects are promoted to old generation regions. 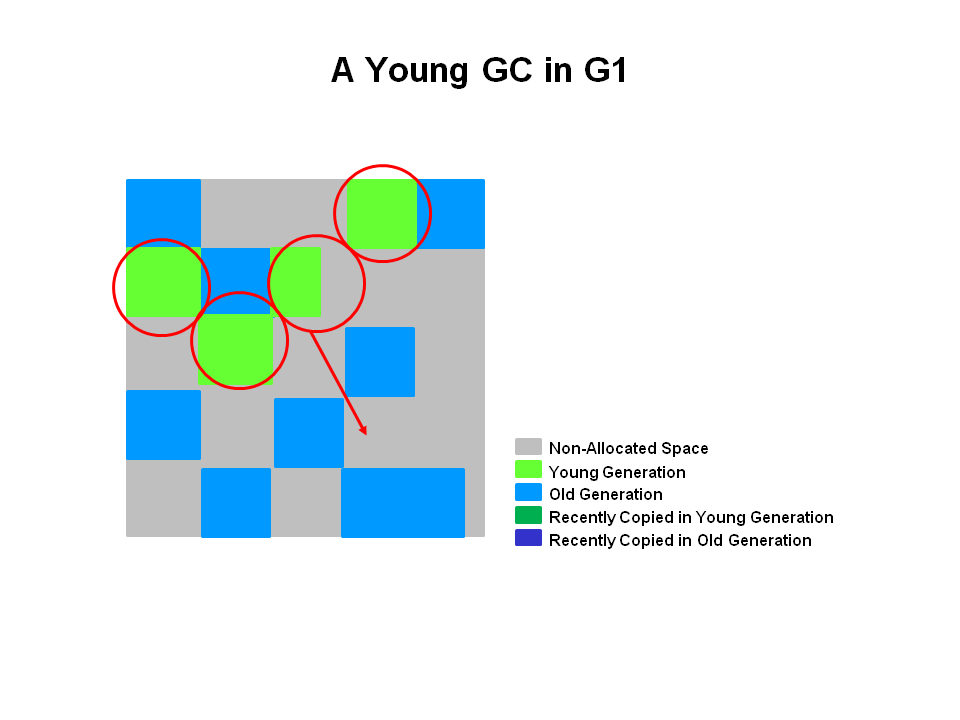 This is a stop the world (STW) pause. Eden size and survivor size is calculated for the next young GC. Accounting information is kept to help calculate the size. Things like the pause time goal are taken into consideration.

This approach makes it very easy to resize regions, making them bigger or smaller as needed.

Live objects have been evacuated（撤离） to survivor regions or to old generation regions.

In summary, the following can be said about the young generation in G1:

The G1 collector performs the following phases on the old generation of the heap. Note that some phases are part of a young generation collection.

With the phases defined, let's look at how they interact with the old generation in the G1 collector.

With the phases defined, let's look at how they interact with the old generation in the G1 collector.

Initial marking of live object is piggybacked on a young generation garbage collection. In the logs this is noted as GC pause (young)(inital-mark).

If empty regions are found (as denoted by the "X"), they are removed immediately in the Remark phase. Also, "accounting" information that determines liveness is calculated. 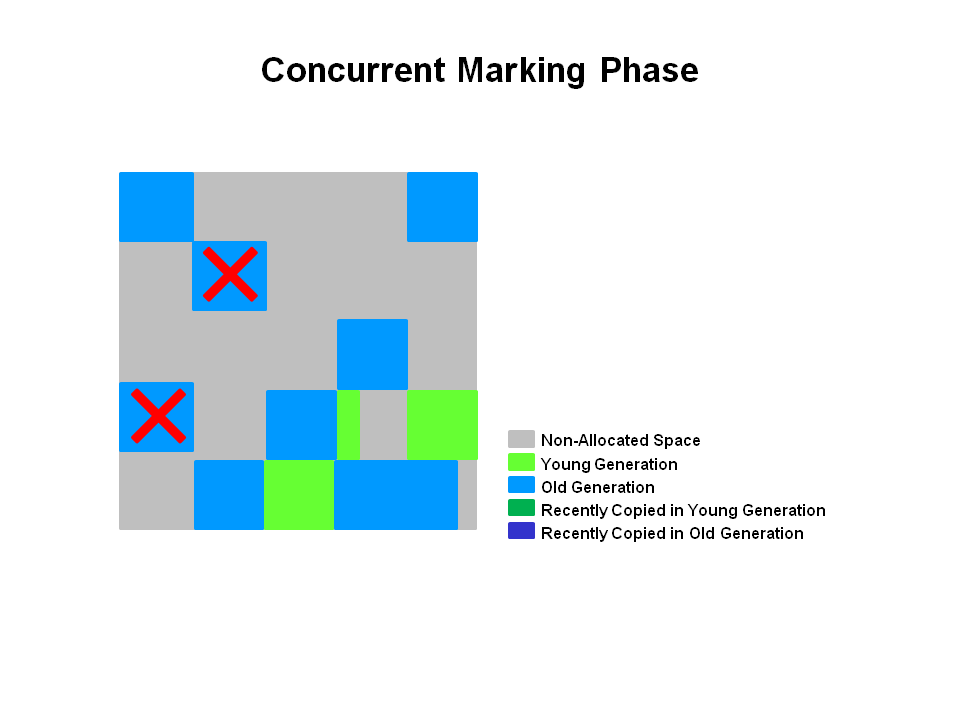 Empty regions are removed and reclaimed. Region liveness is now calculated for all regions. 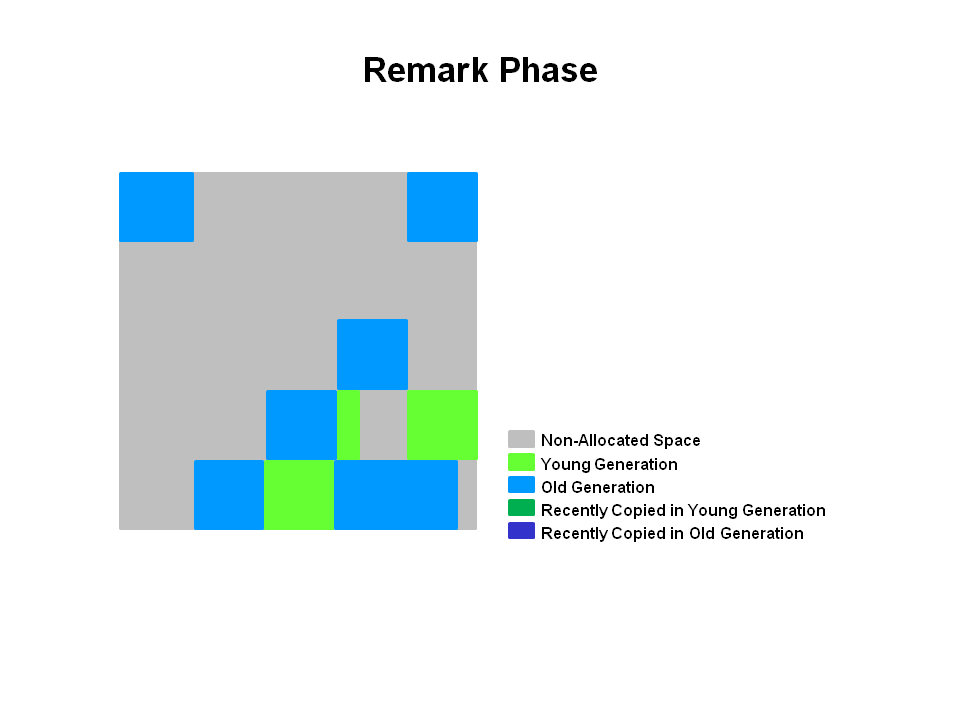 The regions selected have been collected and compacted into the dark blue region and the dark green region shown in the diagram. 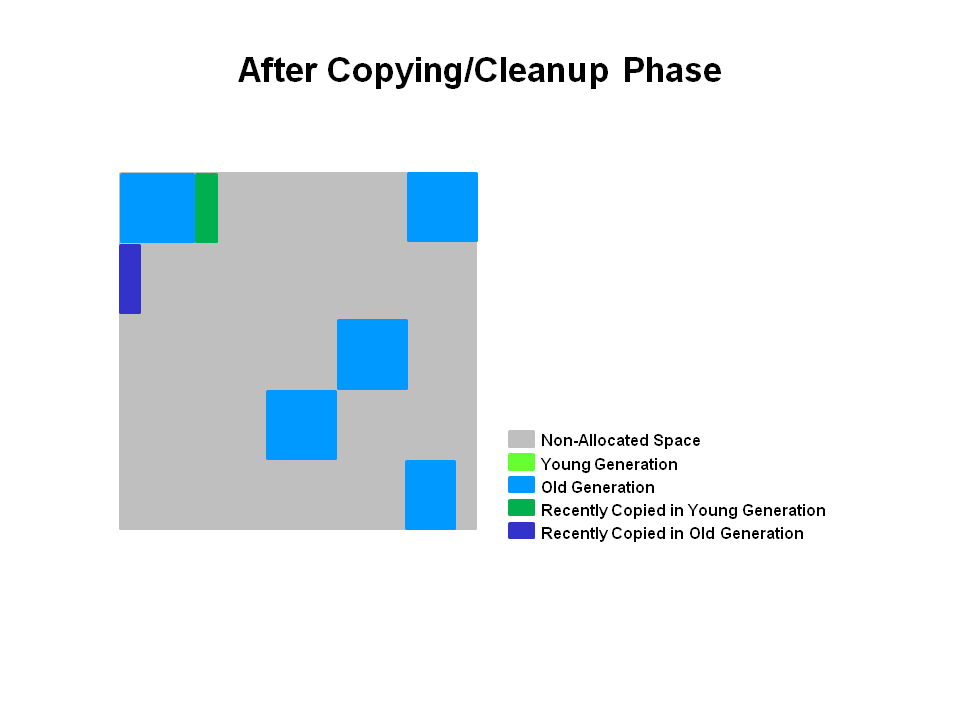 In summary, there are a few key points we can make about the G1 garbage collection on the old generation.

Liveness information is calculated concurrently while the application is running.

This liveness information identifies which regions will be best to reclaim during an evacuation pause.

Uses the Snapshot-at-the-Beginning (SATB) algorithm which is much faster then what was used with CMS.

Old generation regions are selected based on their liveness. 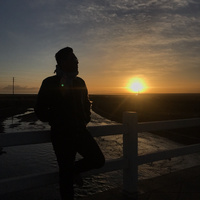