NAND Flash vs NOR Flash

Embedded system designers must take into account many considerations when selecting a Flash memory: which type of Flash architecture to use, whether to select a serial interface or a parallel interface, does it need error correction code (ECC), and so on. If the processor or controller supports only one type of interface, this limits the options so the memory may be easy to select. However, this is often not the case. For example, some FPGAs support serial NOR Flash, parallel NOR Flash, and NAND Flash memory to store configuration data. This same memory can be used to store user data, which makes selecting the right memory to use more difficult. In this article series, the different aspects of Flash memories will be discussed, beginning with the differences between NOR Flash and NAND Flash.

Flash memories store information in memory cells made from floating gate transistors. The names of the technologies explain the way the memory cells are organized. In NOR Flash, one end of each memory cell is connected to the source line and the other end directly to a bit line resembling a NOR Gate. In NAND Flash, several memory cells (typically eight cells) are connected in series similar to a NAND gate (see Figure 1). 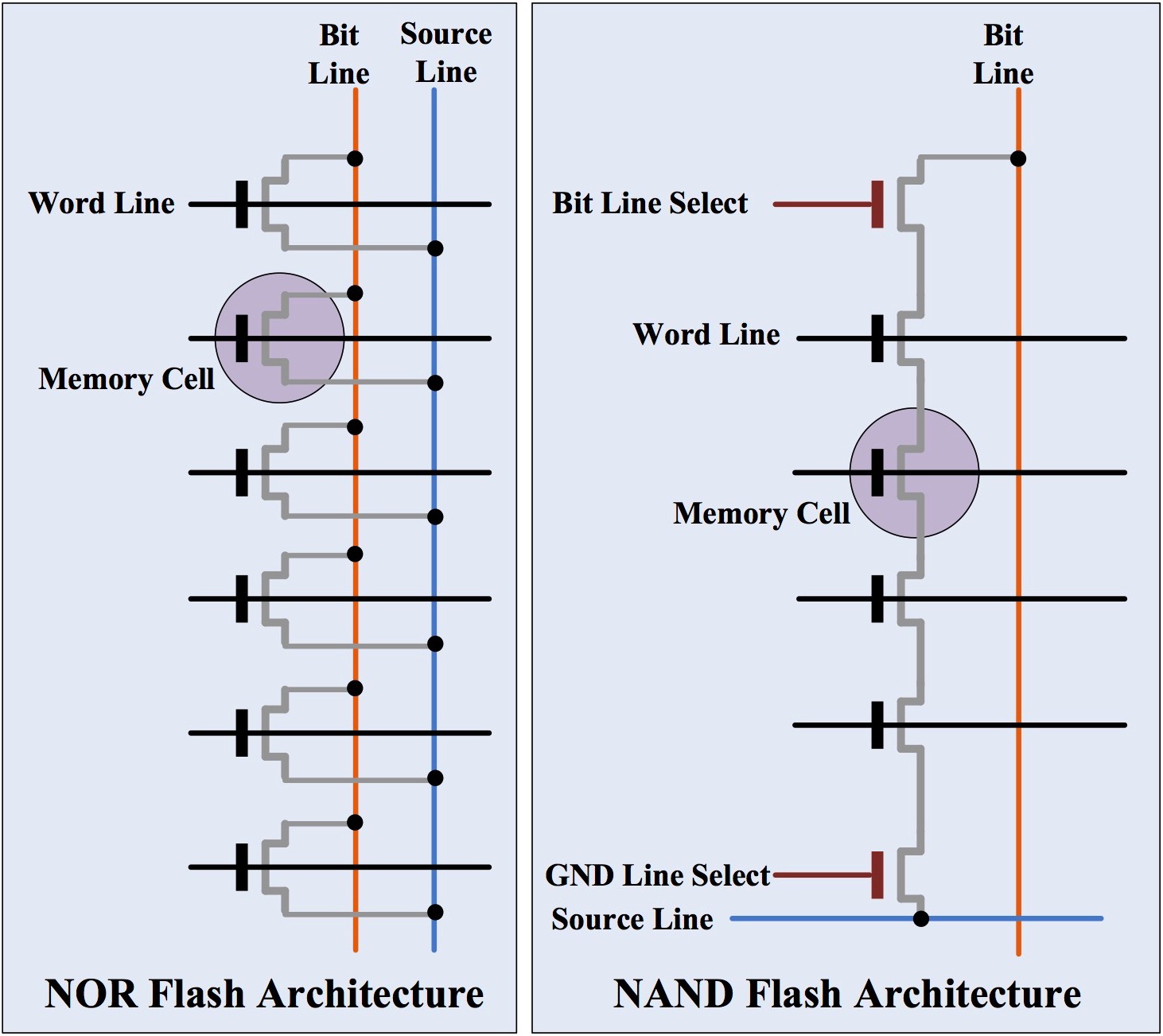 The NOR Flash architecture provides enough address lines to map the entire memory range. This gives the advantage of random access and short read times, which makes it ideal for code execution. Another advantage is 100% known good bits for the life of the part. Disadvantages include larger cell size resulting in a higher cost per bit and slower write and erase speeds. For more details on how NOR Flash can be used in embedded systems, see An Overview of Parallel NOR Flash Memory.

NAND Flash, in contrast, has a much smaller cell size and much higher write and erase speeds compared to NOR Flash. Disadvantages include the slower read speed and an I/O mapped type or indirect interface, which is more complicated and does not allow random access. It is important to note that code execution from NAND Flash is achieved by shadowing the contents to a RAM, which is different than code execution directly from NOR Flash. Another major disadvantage is the presence of bad blocks. NAND Flash typically have 98% good bits when shipped with additional bit failure over the life of the part, thus requiring the need for error correcting code (ECC) functionality within the device.

In both NOR and NAND Flash, the memory is organized into erase blocks. This architecture helps maintain lower cost while maintaining performance. For example, a smaller block size enables faster erase cycles. The downside of smaller blocks, however, is an increase in die area and memory cost. Because of its lower cost per bit, NAND Flash can more cost-effectively support smaller erase blocks compared to NOR Flash. The typical block size available today ranges from 8KB to 32KB for NAND Flash and 64KB to 256KB for NOR Flash.

Erase operations in NAND Flash are straightforward while in NOR Flash, each byte needs to be written with ‘0’ before it can be erased. This makes the erase operation for NOR Flash much slower than for NAND Flash. For example, the S34ML04G2 Cypress NAND Flash requires 3.5ms to erase a 128KB block while the S70GL02GT Cypress NOR Flash requires ~520ms to erase a similar 128KB sector. This is a difference of nearly 150 times.

As mentioned earlier, NOR Flash memory has enough address and data lines to map the entire memory region, similar to how SRAM operates. For example, a 2-Gbit (256MB) NOR Flash with a 16-bit data bus will have 27 address lines, enabling random read access to any memory location. In NAND Flash, memory is accessed using a multiplexed address and data bus. Typical NAND Flash memories use an 8-bit or 16-bit multiplexed address/data bus with additional signals such as Chip Enable, Write Enable, Read Enable, Address Latch Enable, Command Latch Enable, and Ready/Busy. The NAND Flash needs to provide a command (read, write or erase), followed by the address and the data. These additional operations makes the random read for NAND Flash much slower. For example, the S34ML04G2 NAND Flash requires 30µS compared to 120ns for S70GL02GT NOR Flash. Thus the NAND is 250 times slower.

To overcome or to reduce the limitations of slower read speeds, memory is often read as pages in NAND Flash, with each page being a smaller sub-division of erase blocks.  The contents of one page is read sequentially with address and command cycles only at the beginning of each read cycle. The sequential access duration for NAND Flash is normally lower than the random access duration in NOR Flash devices. With the random access architecture of NOR Flash, address lines need to be toggled for each read cycle, thereby accumulating the random access for sequential read. As the size of block of data to read increases, the accumulated delay in NOR Flash becomes greater than NAND Flash. Thus, NAND Flash can be faster for sequential reads. However, due to the much higher initial read access duration for NAND Flash, the performance difference is evident only while transferring large data blocks, often for sizes above 1 KB.

In both Flash technologies, data can be written to a block only if the block is empty. The already slow erase operation of NOR Flash makes the write operation even slower. In NAND Flash, similar to read, data is often written or programmed in pages (typically 2KB). For example, a page write alone with S34ML04G2 NAND Flash takes 300µS.

NOR Flash memories typically require more current than NAND Flash during initial power on. However, standby current for NOR Flash is much lower than NAND Flash. Instantaneous active power is comparable for both Flash memories. The active power is thus decided by the time duration for which memory is active. NOR Flash holds an advantage when it comes to random reads while NAND Flash consumes comparatively much lower power for erase, write, and sequential read operations.

The reliability of saved data is an important aspect for any memory device. Flash memories suffer from a phenomenon called bit-flipping, where some bits can get reversed. This phenomenon is more common in NAND Flash than in NOR Flash. NAND Flashes are shipped with bad blocks scattered randomly throughout, due to yield considerations. More memory cells go bad as erase and program cycles continue throughout the life cycle of NAND Flash. Bad block handling is therefore a mandatory capability for NAND Flash. NOR Flash, on the other hand, are shipped with zero bad blocks with very low bad block accumulation during the life span of the memory. Thus, when it comes to the reliability of stored data, NOR Flash has an advantage over NAND Flash.

The number of program and erase cycles used to be an important characteristic to consider. This is because NAND Flash memories used to offer 10 times better program and erase cycles compared to NOR Flash. With today’s technological advancements, this is no longer true as both memories are now comparable. For example, both the S70GL02GT NOR and S34ML04G2 NAND support 100,000 program-erase cycles. However, due to the smaller block size used in NAND Flash, a smaller area is erased for each operation. This results in a higher overall life span compared to NOR Flash.

Table 1 offers a summary of the major aspects discussed in this article.

Table 1: A comparison of the major characteristics of NOR Flash and NAND Flash with figures for general and specific comparison. (Source: Cypress)

In general, NOR Flash memory makes an excellent choice for applications requiring lower capacity, fast random read access, and higher data reliability, such as is required for code execution. NAND Flash, for its part, is ideal for applications such as data storage where higher memory capacity and faster write and erase operations are required.

In the next article in this series, we will focus on the electrical interface of different types of NOR Flash devices and how this impacts device selection and design.