We have a large solution (60+ C# projects), and were having regular issues with solution Rebuild as incorrect build order would cause failure to resolve referenced projects that had not yet been built (but should have been). Build Dependencies and Build Order appeared correct. MSBuild batch build worked fine, it was only a problem when rebuilding from Visual Studio.

Doing some investigation in a brand new test solution, it turns out that:

I was able to fix our broken rebuild by replacing the reference GUIDs with either all upper case or all lower case -- it's something about the mix of upper and lower case that was giving Visual Studio problems (perhaps case-sensitive string keys in a dictionary somewhere?) Since Visual Studio normally adds references with lower case GUIDs, that is the option I chose to go with.

To fix this, I used Notepad++ regex-based search and replace in files to force all ProjectGuids in .csproj files to be upper case with braces (the default for console applications, and the style Visual Studio will apply after adding any project reference to the project):

Be sure to turn on regular expression search, and turn off match case. And don't search all files, or you may make changes you don't want, for example in *.xproj files, as noted by @AspNyc. (See this answer for additional info on use of regular expressions for changing case.)

I then replaced all references to projects to use lower case with braces (which is what Visual Studio usually does):

Having made these changes, Visual Studio solution rebuild now works reliably. (At least until next time rogue upper case reference GUIDs sneak into our project.) 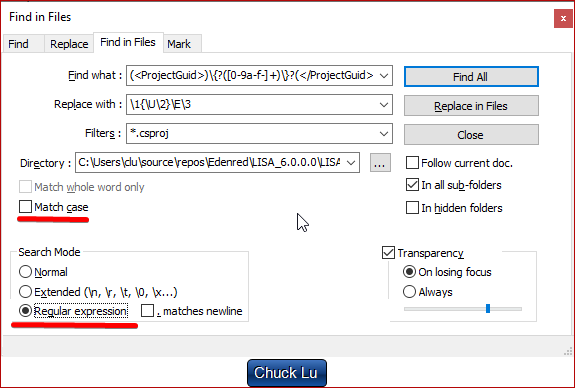