1、A linear transform is one that preserves vector addition and scalar multiplication. Specifically,

2、Combining linear transforms and translations can be done using an affine transform.

An affine transform is one that performs a linear transform and then a translation.

The main characteristic of an affine matrix is that it preserves the parallelism of lines, but not necessarily lengths and angles.

5、This order change can cause incorrect lighting and backface culling to occur. To detect whether a given matrix reflects in some manner, compute the determinant of the upper left 3 × 3 elements of the matrix. If the value is negative, the matrix is reflective.

Assume that scaling should be done along the axes of the orthonormal, right-oriented vectors fx, f y, and f z.

First, construct the matrix F as below:

7、There are six basic shearing matrices,3 and they are denoted Hxy(s), Hxz(s), Hyx(s), Hyz(s), Hzx(s), and Hzy(s). The first subscript is used to denote which coordinate is being changed by the shear matrix, while the second subscript indicates the coordinate which does the shearing.

8、H′ij(s, t) = Hik(s)Hjk(t)。 Finally, it should be noted that since the determinant of any shear matrix |H| = 1, this is a volume preserving transformation. 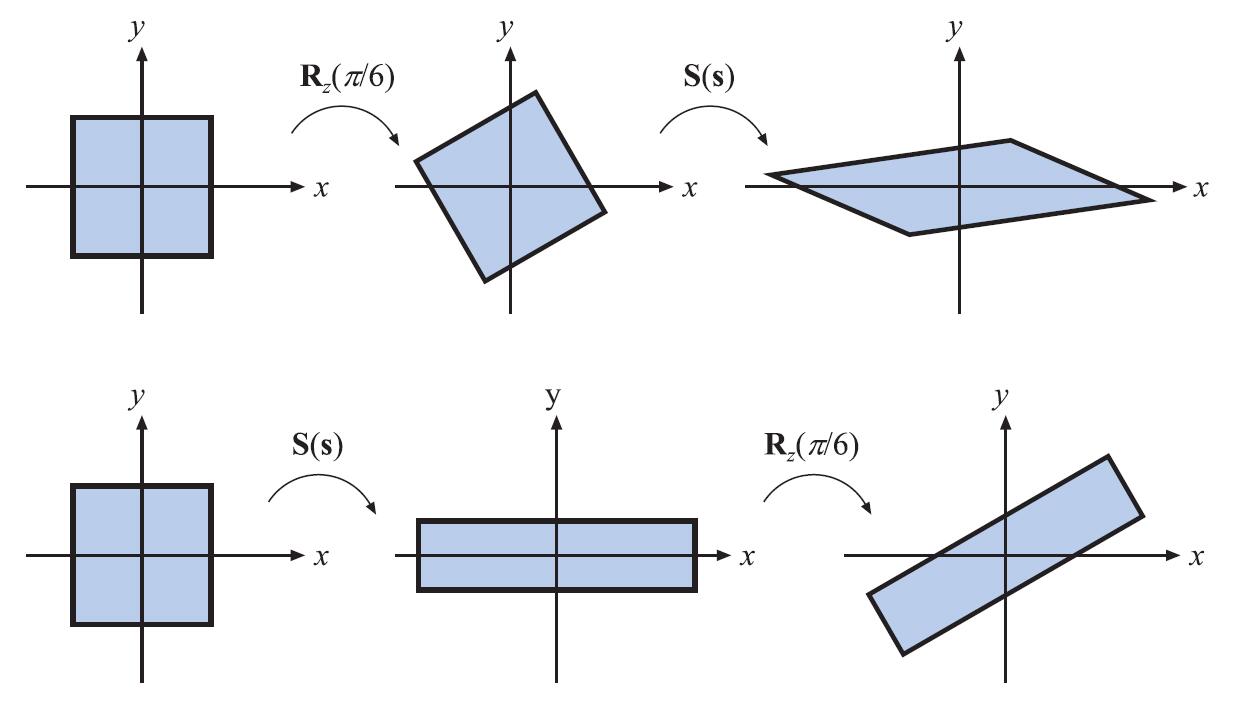 10、a transform, consisting of concatenations of only translations and rotations, is called a rigid-body transform and has the characteristic of preserving lengths, angles, and handedness.

Thus, to compute the inverse, the upper left 3 ×3 matrix of R is transposed, and the translation values of T change sign. 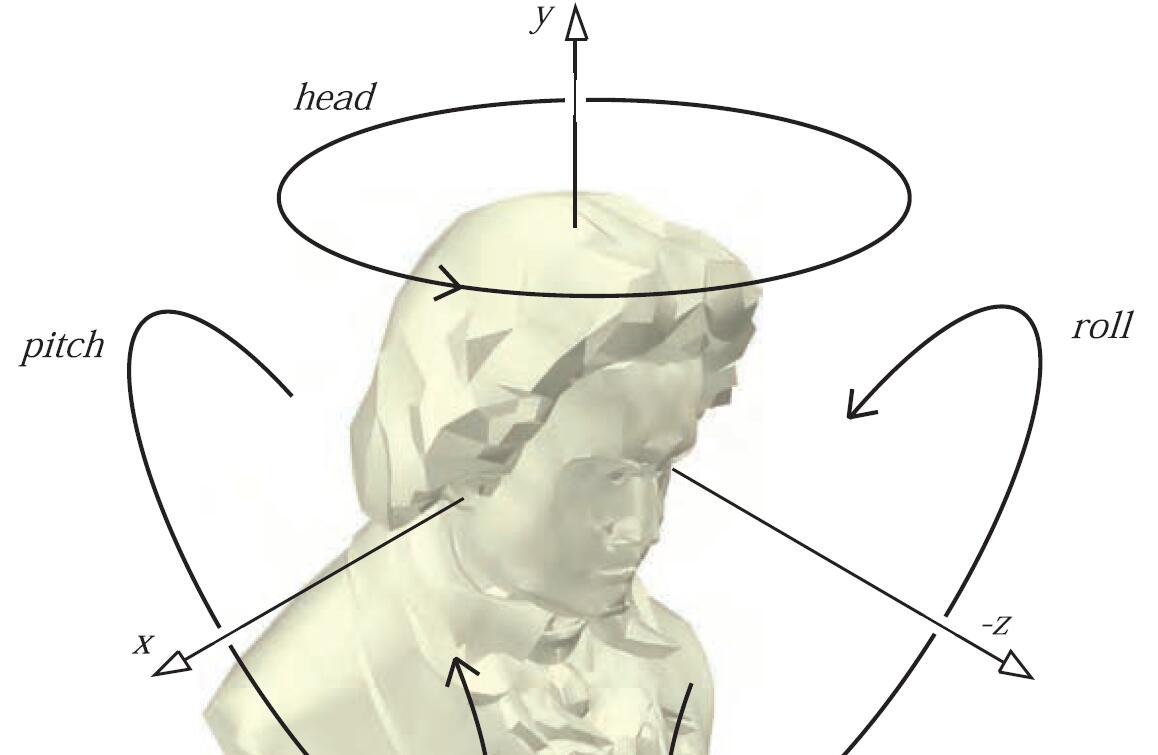 interpolation between one set and another is not a simple matter,  two different sets of Euler angles can give the same orientation, so any interpolation should not rotate the object at all.

We have already presented two decompositions, those of deriving the translation and rotation matrix for a rigid-body transformation (see Section 4.1.6) and deriving the Euler angles from an orthogonal matrix (Section 4.2.2).

It is trivial to retrieve the translation matrix, as we simply need the elements in the last column of the 4×4 matrix.

We can also determine if a reflection has occurred by checking whether the determinant of the matrix is negative.

find the smallest component (in absolute value) of r, and set it to 0. Swap the two remaining components, and then negate the first9 of these.

This matrix transforms the vector r into the x-axis (ex), s into the y-axis, and t into the z-axis.  the final transform for rotating α radians around the normalized vector r is then.

17、 For every 3 × 3 rotation matrix,1 R, that rotates φ radians around any axis, the trace (see page 898 for a definition) is constant independent of the axis.

20、Put the four coordinates of a point or vector p = (px py pz pw)T into the components of a quaternion ˆp, and assume that we have a unit quaternion ˆq = (sinφuq, cos φ).

rotates ˆp (and thus the point p) around the axis uq by an angle 2φ. Note that since ˆq is a unit quaternion, ˆq−1 = ˆq∗. This rotation, which clearly can be used to rotate around any axis

ˆq and −ˆq represent the same rotation. That is, negating the axis, uq, and the real part, qw, creates a quaternion that rotates exactly as the original quaternion does.

Given two unit quaternions, ˆq and ˆr, the concatenation of first applying ˆq and then ˆr to a quaternion, ˆp (which can be interpreted as a point p), is given by Equation 4.41:

21、A quaternion, ˆq, can be converted into a matrix Mq. （书上并未给出此公式的推导过程，而是直接给出此公式）

Here, the scalar is s = 2/n(ˆq). For unit quaternions, this simplifies to:

However, for software implementations, the following form, where slerp stands for spherical linear interpolation, is much more appropriate: 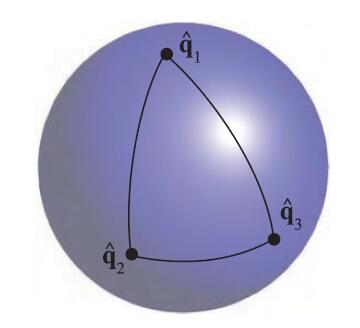 The slerp function is perfectly suited for interpolating between two orientations and it behaves well (fixed axis, constant speed). This is not the case with when interpolating using several Euler angles.

24、After some algebraic and trigonometric simplification of Equation 4.43,the rotation matrix becomes [893]:

In this equation, we have used the following intermediate calculations:

As can be seen, all square roots and trigonometric functions have disappeared due to the simplifications, and so this is an efficient way to create the matrix.

the entire mesh is often called a skin.

the final location is interpolated from the set of computed points. The matrix Mi is not explicitly shown in some discussions of skinning, but rather is considered as being a part of Bi(t). 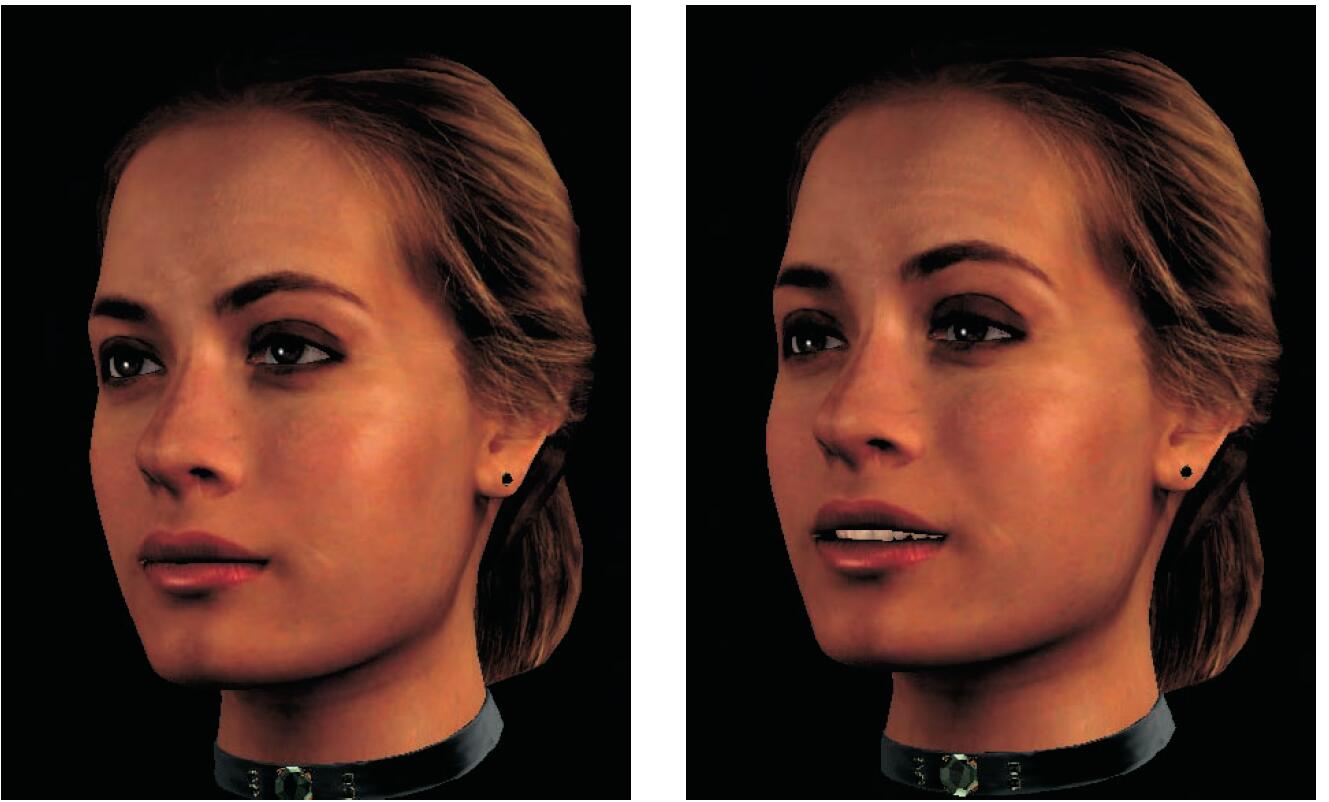 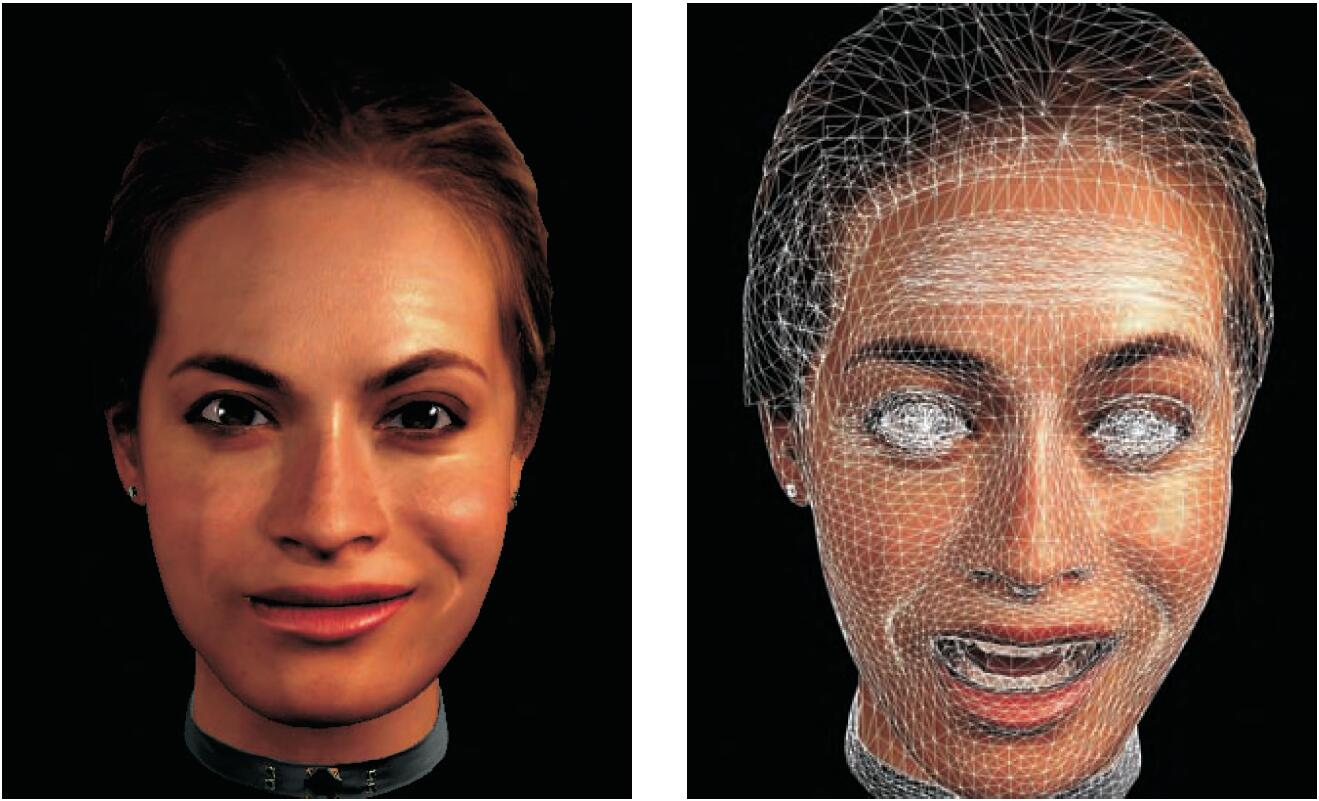 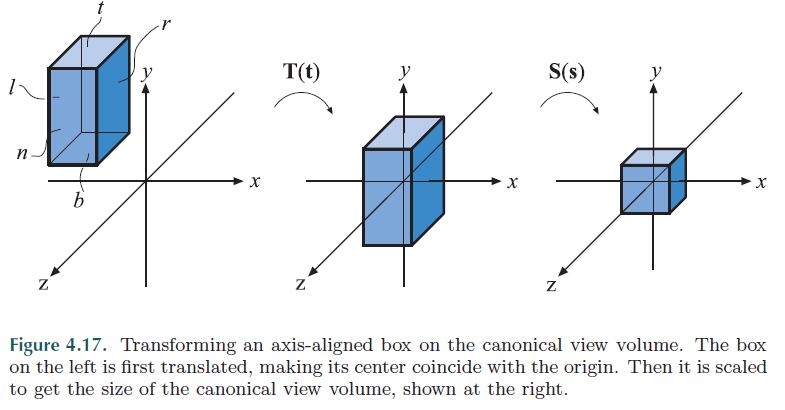 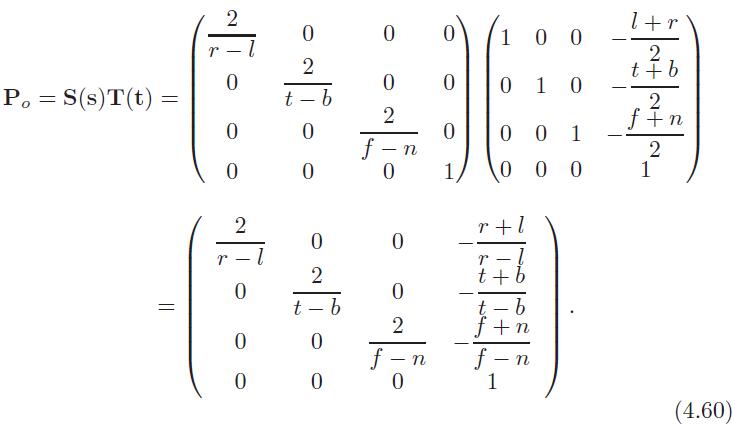 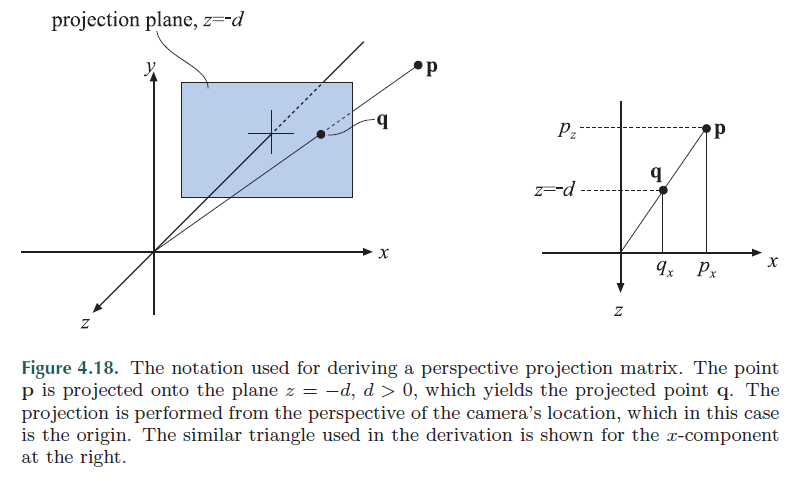 One effect of using a perspective transformation is that the computed depth value does not vary linearly with the input pz value. For example, if n′ = 10 and f′ = 110 (using the OpenGL terminology), when pz is 60 units down the negative z-axis (i.e., the halfway point) the normalized device coordinate depth value is 0.833, not 0. 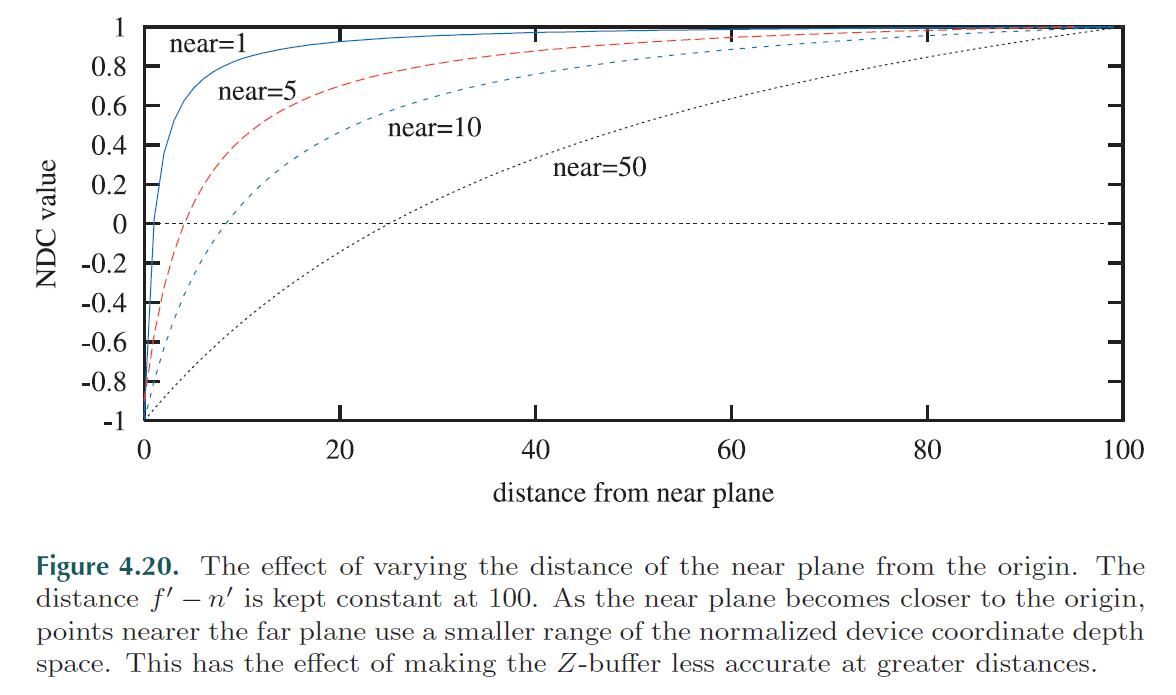