In the US, the ethos is “bigger is better.” Look no further than our roads where large trucks and SUVs dominate the lanes. These plus-sized vehicles are killing our environment and wreaking havoc in our communities, and yet we can’t seem to stop buying them, convinced that the bigger the wheelbase, the better we’ll feel about ourselves and our place in this rapidly unraveling world. 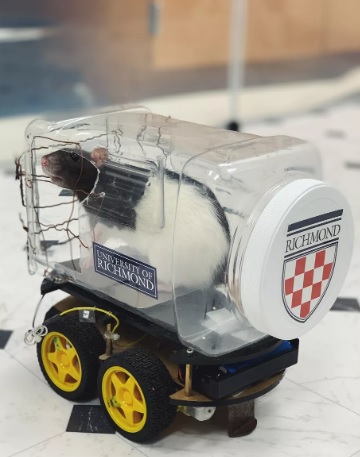 To which I say, look to the humble lab rat. Researchers at the University of Richmond taught a group of 17 rats how to drive little plastic cars in exchange for bits of Fruit Loops cereal. Driving helped the rats feel more relaxed, said the study’s lead author Kelly Lambert. Here’s how The New Scientist describes it:

This finding echoes Lambert’s previous work showing that rats become less stressed after they master difficult tasks like digging up buried food. They may get the same kind of satisfaction as we get when we perfect a new skill, she says. “In humans, we call this self-efficacy or agency.”

I’m no HUC99 scientist, but I like to think that the rats felt less stressed because the cars they were driving were appropriately sized as well as electric powered and made of plastic. Had they been driving some steel behemoth with a gas-chugging 3.3-liter V6 engine, 450 horsepower, and 8,000-lb towing capacity, I can’t help but assume their stress levels would have spiked. They may even have become hostile toward other rats who were trying to use the road, as anecdotal evidence has shown that driving extra-large vehicles can lead to unhealthy levels of road rage.

Thankfully, Lambert and her cohorts gave these rats small cars to drive. Our culture may frown upon such petite vehicles, but that view is not universal. Europe and other markets have proven to be a haven for compact vehicles.

Lambert and her team uncovered another interesting tidbit: the rats that drove themselves had higher levels of dehydroepiandrosterone and were less stressed than rats that were driven around as passengers in remote-controlled cars.

Perhaps our dalliances with autonomous vehicles and robot taxis are a mistake? And electric micromobility in the form of battery-powered scooters and bikes is the future? This demands further research, this time with human subjects. Commence the clinical trials!